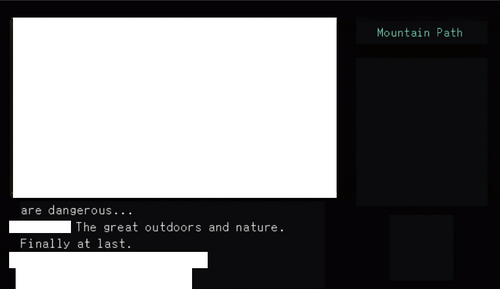 So, the steam page is almost ready to go! I need a better font for my  marketing images on there... and a trailer... hopefully I'll have that soon.

I've been waffling over the price.. thinking $6-$8 or so. The game is probably around 2 hours long?, longer if you read slowly.

Not too much to report - I did start work on a few more areas. I'll probably continue with this till all the areas and NPCs are in, then see where I am with texturing work to do. I might just say "forget it!" and call it finished around then. There is still a lot of music to make, though.

I'd like to avoid November/December for release... but then I'd have to wait two months to release something... maybe that's okay. Most likely I will rush it out by October!

The areas I've made recently are quite cool. I'm getting much better at imagining an area and committing it into 3D. Better at noticing textures here and there. But I can't share them with you, because of spoilers (my manager says so.)

I just received a character portrait from my friend who I hired to help with some art! It's great! But I won't show any until the trailer... sorry.

That's Joni Kittaka and I's company if you didn't know. We're Branding it now, making a proper website, as we get into our 3rd project later this year. This is because we need to Sell More Copies To Survive. Look forward to it!

I changed the font. Spoilers censored. The previous font was a little too weighty... the thickness and serifs it had overly accentuated the contrast of hi-def UI to lo-fi game world. I think this font - by virtue of being thin, pixel - fits the overall PSX feel more.

Plus, I changed the dialogue box to display only 5 lines rather than 7. I originally meant the dialogue to be like an MMORPG chat log, but without going all the way on that idea, the box felt a little cramped showing 7 lines. 5 lines is much closer to normal game dialogue boxes (most of which max out at 3 lines).