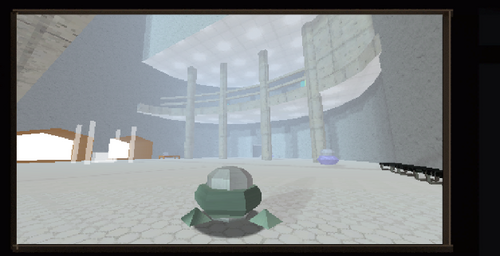 A lot of this week was spent on lesson planning for my classes and also some other stuff, however, there was progress on the game. Sorry but no new screenshots (though I have a lot... secret...) however... here's an old screenshot.

Hmm... I don't have that much complicated stuff to talk about. I will ramble a bit at the end.

This game is quite 'surreal' in that areas do not necessarily flow in a realistic way. However, rather than have this be purely weird I've been shaping it to be interesting in a plot level and metaphor level. Since this story (and I guess, most stories) involves character development, I like to make the areas and worlds in a way that the way you progress through them is also representative of the character's development. It's a nice organizing principle and helps to motivate certain choices rather than  just "Well, It is Cool." So the plot is literally what is happening to the player in the story, but can also metaphorically be seen as a way to represent character development.... yeah.......